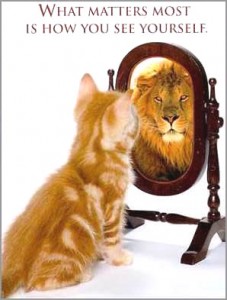 t appears that no matter how much you may be dissatisfied with the way things are in your life, there are outside forces that reinforce your same old behavior.  This includes people with whom you interact with regularly.  There is always a propensity for others to either implicitly or explicitly attempt to persuade others to think and/or behave in ways they would like.  For you, this becomes easier when you free float through your life with no clear idea what is best for you or where you want to go.

I saw a patient recently who as a child experienced a very traumatic upbringing that adversely affected her self image.  As a result, as an adult, her relationships with others had always ended with disappointment.  At work, though she is an excellent employee, she minimizes her accomplishments and is hyper sensitive to anything that may resemble criticism by her supervisor. Her feeling good about herself is dependent on others’ opinion and not on the development of a realistic positive self image. Recognizing and focusing on the positive features of herself would go much further than engaging in chronic negative self talk.

I would recommend that you attempt to be vigilante as to the positive features about yourself and acknowledge them each day. This will need to be done in spite of pressure from others for you to make choices that are not in your best interest.  Also remember that being open to new ideas from others does not mean you have to blindly follow them.

Remember the words of                e.e. cummings: “To be nobody but yourself in a world which is doing its best, night and day, to make you everybody else means to fight the hardest battle which any human being can fight; and never stop fighting.”